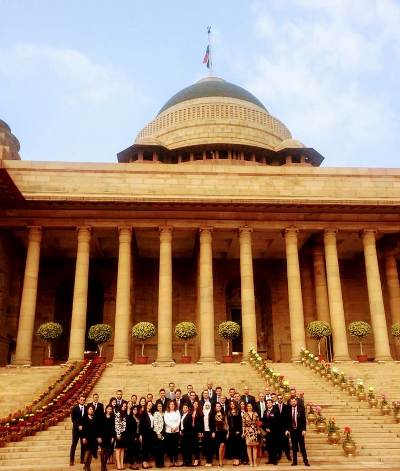 The 2nd Special Course for Syrian diplomats is being held at the Foreign Service Institute (FSI) of the Ministry of External Affairs of India on 4-16 February 2019. 40 young diplomats from Syria are participating. The delegation is led by Amb. Ghassan Nseir, Dean of the Syrian Diplomatic Institute.

The Special Course was inaugurated at FSI on 4 February 2019. On 3 February, Amb. J.S. Mukul, Dean (FSI) hosted a welcome reception for the Syrian diplomats, in which the Ambassador of Syria to India, H.E. Dr. Riad Abbas, too, participated. Amb. T.S. Tirumurti, Secretary (ER), Ministry of External Affairs of India and other senior officers of the Ministry would address the Syrian diplomats as part of the training programme.

The Special Course would include modules on India’s foreign policy, key international issues, multilateral diplomacy and diplomatic skills. The Syrian diplomats would also get an exposure to India’s economic and technological development and undertake study tours to experience the rich cultural heritage of India.

By way of background, the 1st Special Course for 26 diplomats was successfully held at the FSI in January 2018. To date, 36 Syrian diplomats have participated in FSI training programmes for foreign diplomats.