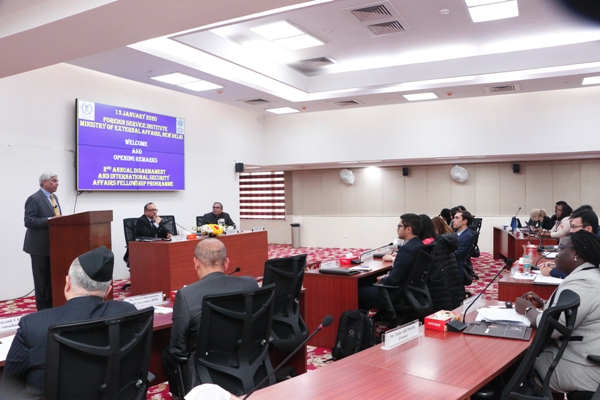 It gives me great pleasure to welcome you all to the Second Annual Disarmament and International Security Affairs Fellowship Programme, and to share some thoughts with you.

As the world’s largest democracy, India has always played a key role in international affairs.  Add to that our fast growing economy, the fifth largest in the world last year, and the scientific and engineering talent pool that India possesses and you can see why India matters in the world of today.  Our ability to shoulder greater responsibilities at a time when the world is more reticent is also evident and has been welcomed. India’s willingness to shape key global negotiations, such as the Paris Agreement on Climate Change, has been widely appreciated. The international community has not only welcomed our role in global security affairs, there is also a desire that India should enhance its role and contribution in dealing with global security challenges.

We have a pragmatic and outcome oriented foreign policy which aims to enhance India’s security, uphold its territorial integrity and promote and facilitate India’s economic transformation. With strategic autonomy at its core, India has continued to step up its engagement with all the major powers of the world, taking independent decisions in the national interest.

In the 21st century, the center of geo-economic gravity has shifted decisively to Asia.  We share with the international community the objective that a multi-polar world should have a multi-polar Asia at its core. India believes that it is nations which have an optimal mix of capabilities, relationships and positioning who can aspire to occupy the multiple poles of the emerging international order.

We have recognized that we have entered a world of convergences and issue-based arrangements. Building strong partnerships with like-minded states on specific subjects, i.e. issue based alignments has facilitated management of great power relationships, expanding regional outreach and increasing our global footprint. India’s policy of ‘Neighbourhood First’ continues to be accorded the highest priority, with a focus on creating a mutually beneficial, people-oriented, regional framework for stability and prosperity. ‘Act East’ and ‘Look West’ policies have been key facets of India’s global engagement.

Protecting India’s national security interests has been an essential imperative of India’s foreign policy. We have been engaged in developing a comprehensive security strategy for India, encompassing both traditional and non-traditional threats, including terrorism and its enabling eco-system, that can threaten or retard India’s developmental aspirations.

We regard terrorism as the gravest threat to international peace and security. We consider terrorism as acts against entire humanity and a challenge for all civilized institutions and entities. The spread of terrorist organisations like the Daesh (ISISA), Al-Qaeda, LeT etc. at a global level and the significant rise in acts of terrorism directly undermine international peace and security and endanger ongoing efforts to strengthen the global economy and ensure sustainable growth and development.

We are resolved to combat terrorism in all its forms and manifestations. We have unequivocally condemned all acts, methods and practices of terrorism, which cannot be justified under any circumstances, regardless of their motivation, wherever and by whomsoever they are committed. We have reaffirmed that terrorism cannot and should not be associated with any religion, nationality, civilization or ethnic group.

India has called for addressing the menace of global terrorism based on a comprehensive approach which should include, but not limited to, countering violent extremism, countering radicalization and recruitment, disrupting terrorist movements, stopping all sources for financing of terrorism, stopping flow of FTFs (Foreign Terrorist Fighters), dismantling terrorist infrastructure, and countering terrorist propaganda through the internet.

We urgently need to isolate the sponsors and supporters of terrorism. Urgent action against all such entities, including States which clandestinely support terrorism and use it as an instrument of State policy, must be taken.  India had urged all nations to enhance cooperation in intelligence sharing, law enforcement, developing best practices and technologies, mutual legal assistance, extradition arrangements, capacity building etc. for countering terrorism.

Amongst the foremost challenges to India’s security that we face today are the threats to the global strategic stability.  With the demise of the INF Treaty, there is a danger of a new missile race, which is aggravated by the growing prospects of race in development and possession of disruptive technologies such as Hyper Glide Missiles and Under Water Drones. The use of new and emerging technologies, such as artificial intelligence and automated learning, in developing lethal weapons, including weapons of mass destruction, has emerged as a significant threat to global strategic stability.  There is concern over the future of the New Start Treaty and the prospects for further reduction in nuclear arsenals and their delivery systems. In view of the impasse in strategic arms control,  India has called upon the international community to remain engaged in dealing with these and other related challenges to global strategic stability.

There is also a growing threat of horizontal and vertical proliferation of nuclear weapons which will pose a grave danger to international peace and security.  India has contributed immensely to the global efforts towards non-proliferation.  It has extended its support for implementation of the JCPOA by all the concerned parties. We have also supported the talks between the United States and the DPRK as well as the DPRK and Republic of Korea for de-nuclearisation of the Korean Peninsula and establishment of peace and security there.  We hope that global disarmament machinery will be reinvigorated to enable it to deal with non-proliferation challenges and there will be progress towards nuclear disarmament, which we fully support. We also fully support all the initiatives aimed at preventing nuclear non-proliferation.

Security of cyber space presents another key security challenge. Threats to cyber space which emanate from state and non-state actors have multiplied. The cyber domain is increasingly used by terrorists, as witnessed in the live streaming of Christchurch shooting via Facebook. As democracies, we are vulnerable to these threats and require cooperation to deal with them by reforming existing mechanisms and developing new innovative ways to take timely and concrete actions.

The Internet has facilitated economic growth and extended governance reach in India. Multiplicity of actors in cyber space as well as growing dependence of critical infrastructure, such as our ports, airports, electricity grids, e-governance systems, and businesses, on the cyber platform imposes on us the responsibility to address concerns related to protection of critical infrastructure. We need cooperation on high-end cyber R&D and on capacity and skill building. We hope to build a pool of 500,000 cyber professionals in India, who will serve as the bulwark of safety and security in the global cyberspace arena.

The deteriorating situation in the Middle East and the Gulf region, is a major cause of concern for India. India currently imports nearly 20% of its crude oil from the Gulf region and nearly 9 million Indians live, work and do business in the Gulf countries. Nearly $40 billion of the $70 billion remittances are from non-resident Indians of the Gulf alone. The Gulf and West Asia remain important for India’s energy security. Any conflict in the region will have spillover effects on the security of India. Peace and stability in the region is therefore essential for India.

India has been a seafaring nation since ancient times. The security of its maritime trade, and sealanes is a high priority for India. The original logic of inter-connected maritime space has today reasserted itself, naturally and in an evolutionary manner, in the form of Indo-Pacific. The Indo-Pacific encompasses our western ocean neighbors in the Gulf, the island nations of the Arabian Sea, and our partners in Africa and the countries in South and East Asia.  Prime Minister Shri Narendra Modi had set out India’s vision and approach of a free, open, rules-based and inclusive Indo-Pacific in his address to the Shangri-La Dialogue in Singapore in 2018 and I would urge you to take a look at it.  At the 14th East Asia Summit in Bangkok in November this year, Prime Minister Modi presented our Indo-Pacific Oceans’ Initiative which provides a framework for cooperation in maritime domain in Indo-Pacific amongst the countries of the region and beyond.

Before I conclude, let me briefly mention space security, which is another important dimension of India’s national security.  Outer space has today become a critical part of our day to day lives. Space technology is an integral part of our efforts towards sustainable development. The main objective of our space programme is ensuring the country’s social and economic development and its security.  We have taken all necessary steps to ensure the security of our space assets.  We have also supported international efforts aimed at preventing weaponisation of outer space and an arms race therein.

Over the next few weeks, you will have the opportunity to engage with scholars, diplomats, and scientists on various topics related to disarmament and arms control. I hope you would avail of this opportunity not just for enriching your knowledge but also for building ties with fellow diplomats that will remain lifelong bonds.