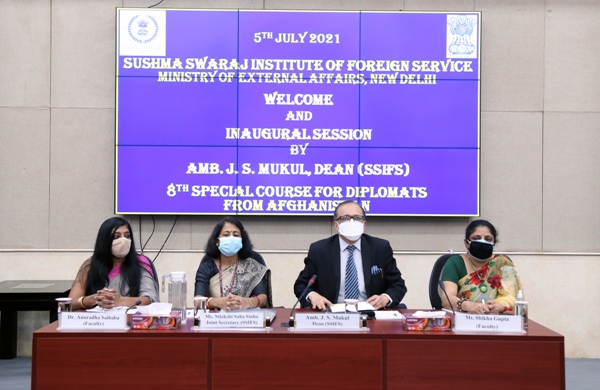 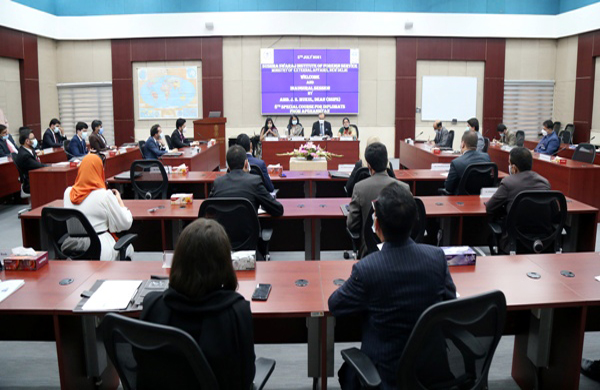 The Special Course was inaugurated on 05 July 2021 by Amb. J.S. Mukul, Dean (SSIFS). A welcome reception  is also being hosted . The Special Course would include modules on India’s foreign policy, bilateral relations with Afghanistan, key international issues, multilateral diplomacy, diplomatic and communication skills, diplomatic protocol, role of women in diplomacy, economic diplomacy, negotiation skills, international law, health diplomacy, Indian culture and cinema, opportunities in higher education in India etc. In addition, as part of their study tours, they would be undertaking visits to the Rashtrapati Bhavan, Election Commission of India, International Solar Alliance etc.  The course also includes study  tours of historical and cultural monuments in order to experience the rich cultural heritage of India.

There exists an institutional mechanism for cooperation in diplomatic training between the two countries. A Memorandum of Understanding (MoU) in this regard was signed 01 September 2004 between SSIFS, MEA, GoI and the Institute of Diplomacy of the Ministry of Foreign Affairs of the Islamic Republic of Afghanistan. Prior to this course, 191 Afghan diplomats have trained at SSIFS, constituting the highest number of diplomats from any foreign country.

India and Afghanistan have a strong relationship based on historical and cultural links. The relationship has its foundations in the historical contacts and exchanges between the people. In the recent past, India-Afghanistan relations have been further strengthened by the Strategic Partnership Agreement, which was signed between the two countries in October 2011 and provides for assistance to help rebuild Afghanistan's infrastructure and institutions, education and technical assistance to re-build indigenous Afghan capacity in different areas, encouraging investment in Afghanistan's natural resources, providing duty free access to the Indian market for Afghanistan's exports, support for an Afghan-led, Afghan-owned, broad-based and inclusive process of peace and reconciliation, and advocating the need for a sustained and long-term commitment to Afghanistan by the international community. The State visit of PM Narendra Modi to Afghanistan 25 December 2016 gave a new impetus to the bilateral partnership.  The Indian Diaspora in Afghanistan has contributed actively to Afghanistan’s progress.